Wishing to answer the question, "what music clip would be the most opposite of Trintje Oosterhuis singing Burt Bacharach & Carole Bayer Sager's awfully sappy but lovely That's What Friends Are For?", my uncontrollable muse responds with reflections of a favorite jazz musician, the great Steve Lacy.

Lacy was a true maverick and giant among giants of jazz, as well as my favorite soprano sax player - Bechet, Sam Rivers, Wayne (Shorter) n' Coltrane not withstanding.

Steve was also one of the finest, most contemplative interpreters of the music of Thelonious Monk and the less known but equally amazing Herbie Nichols; last time I heard him in person, he explored the amazing architecture of Monk's music with the great Mal Waldron on piano.

Here he is, circa mid-1980's, supported by one of his best bands, featuring:

Trintje Oosterhuis sings The Look Of Love and That's What Friends Are For.

A Trip To The Comedy Museum

Want a mind-bending experience? Jumping out of airplanes? For amateurs. Trendy designer chemical amusement? Strictly for pikers. Try spending three days in the bizarro universe of prehistoric film comedy. I just willingly did this for the third year in a row, and trust me, my mind is bent.

I am describing the annual Presidents' Day weekend Mid-Winter Comedy Festival at the Niles/Essanay Silent Film Museum, a wonderful and historic venue. The museum's Edison Theatre was built as the town nickelodeon way back in 1913, when "Broncho Billy" Anderson was cranking out westerns down the block.

The fest runs the gamut from the iconic (Chaplin, Keaton) to the obscure (Eddie Boland). It's a bonanza for students of comedy.

The festival reinforced several conclusions on my part:

The fest offers an off-kilter nirvana for comedy buffs and film historians - and there were lots of them in the house for all three days of this event.
Posted by Paul F. Etcheverry at 9:45 PM No comments:

What (No - I Mean WTF) Is This Thing Called Love? by Paul F. Etcheverry 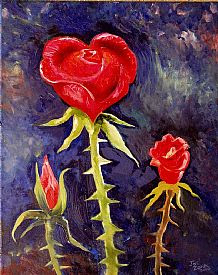 "Maybe I wanted to hear it so badly that my ears betrayed my mind in order to secure my heart." Margaret Cho

"We're not meant to be - see." Herbie Nichols

"Love is like a faucet. It turns on and off." Billie Holiday

"The object of my affliction." Anonymous or Norm Crosby

Dear reader: This is my homage to Valentine's Day, a consumerist holiday that excludes hordes of humanity - and even ardent, passionate lovers lacking that do-re-me - if there ever was one.

In my experience, relationships in real life happen SLOOOOOOOWLY; slower as you get older - and tortuously slow when you have not been with anyone in a very long time. The issues of how you convey to a new person in your life that you love and care for them, how you deal with doubts and each other's idiosyncracies, how to differentiate between what's real and what's strictly static (i.e. something you or your friend/partner may be feeling physically or emotionally in a given moment that has nothing to do with the relationship) are not easy. Relationships? Not for cowards.

I wrote the original version of this last March, just after losing my job, my place to live and all hope of finding even a badly bruised valentine.

Well, it's almost a year later and these days, I'm significantly more mellow, realizing that things worked out at least okay after all. Most of the setbacks led directly to good things.

And while I wax snidely and cynically, don't believe for a heartbeat that I would pass up an opportunity to offer something floral, sumptuous and beautiful for the fetching woman companion I fancy most, just to see her smile.

"What Is This Thing Called Love?" is the title of a timeless standard, recorded by the giants of 20th century music: Art Tatum, Frank Sinatra, Ella Fitzgerald, Clifford Brown, you name 'em. It's also a question that your at times humble correspondent absolutely cannot answer.

So what is this thing called love? I have no freakin' clue. I'm like about 50% of the public; past attempts at 'love and marriage' have traditionally either aborted gruesomely, ended abruptly, or crashed and burned like The Hindenburg, no survivors, baby - but, like the genteel and refined "Jimmy The Gent" Conway in GoodFellas, I'll take a whack at it . . .

When I speak of love here, I do not mean infatuation (aptly described in the 1960's ditty by The Temptations: "it was just my imagination running away with me"), momentary sexual or emotional fireworks, or deeper yet fleeting connections between people. All of the above - all of it - comes and goes.

Close relationships are not for the faint of heart; the real thing strikes abject terror into our souls. The very hint of love makes publicly stout-hearted men and women quake in their cowboy boots, tennies, high heels or Gucci shoes! It's the scariest, the riskiest, most daunting and brutally intimidating of all those terrifying motherfuckers, messing with your thought and behavior patterns whether you want it to or not.

If the genuine item - directly from considerable meaningful interaction between two people, tangible and mutually supportive, reality-based - looks like a possibility, start a betting pool predicting just when one or both potential partners do everything in their power to screw it up, make the other person have second thoughts or go away. And if the intrepid pair have previously seen long-term relationships tank, make all this exponential!

Did I learn anything from my past experiences? Just common sense stuff we all know but have difficulty practicing. First and foremost, if you don't take care of the precious sapling, it dies, kind of like those lil' turtles you'd bring home in elementary school. Needs TLC, just like your pet or house plant - and, indeed, this also applies to close friendships and family.

Yes, love dies - I've seen it happen - and here are a few surefire ways to annihilate it!

Timing and that inexplicable thing called karma, which you just can't make happen, are always of the essence; you're either both ready to take the plunge or you're not. And sometimes the planets just aren't aligned for you, even when the relationship is the real deal, wondrous and supportive, a thing of beauty. The reality, not just that it isn't your time, but that the two of you, as magical as your time together may be, just aren't meant to be a couple or have a life with each other - can be difficult to accept, but there is no other choice.

Can you accept such realities, or the end of a long-term relationship, or a special someone's baffling inability to reciprocate by trying Socratic Inquiry techniques or the "four simple questions and a turnaround" method developed by author Byron Katie ( a.k.a. ways of examining your opinions about and internal reactions to life events)? I have serious doubts. Maybe it's possible to make a little smidgen of progress with these methods - and maybe it's not. Healing sure as hell doesn't come fast or easy, although there are certainly worse ways of coping, such as embracing a program of assured self-destruction, signing up with the French Foreign Legion or joining a cult.

The Zen masters insist that "we are love" - but are we? Ideally, yes - but only ideally. At times humanity can be shining examples of such a thing. While it may be due to destructive thinking and attitudes (which in many cases can be dealt with), the bottom line remains that so many human beings are much more inclined to flee from love, torch it or chase it away with a baseball bat than practice it.

Then again, let's drop the subject altogether and listen to those swingin' cats who recorded that great standard right now! And I promise to return to the pet topics of this blog - classic movies, comedy, animation and music clips - after listening to that fantastic version of What Is This Thing Called Love? on Frank Sinatra - In The Wee Small Hours. Really!

The Pampered Soulless Honky's Guide To Singing The Blues

Here's an item that has circulated around the web for awhile. I have no clue who started it. Every time it goes around, another latte-swilling honky would-be writer (I plead guilty) tweaks with the copy. I encourage readers to do the same.

HOW TO SING THE BLUES
by Lame Mango Washington (attributed to Memphis Earlene Gray with help from Uncle Plunky, revisions by Little Blind Patti D. and Dr. Stevie Franklin, with a few tweaks by Lazy-Eye Raspberry Kennedy and Phat Lemon Johnson)