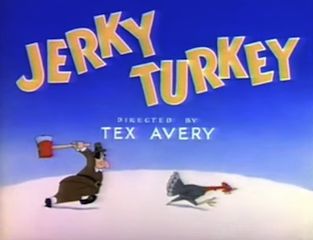 Posted by Paul F. Etcheverry at 2:19 PM No comments:

The late Robert Altman was an original soul and unique, provocative director long before he hit the big time with M*A*S*H in 1970. If you can find any of Altman's Alfred Hitchcock Presents episodes, check 'em out. While you only see glimpses of the mature Altman style, the episodes I have seen are quite wonderful. One co-stars an uncharacteristically subdued Jayne Mansfield with Tony Randall, whose creepy performance as a charming, successful TV star but very bad guy invites comparisons to Andy Griffith's inspired work in A FACE IN THE CROWD. This is a Tony Randall that, I promise, you have never seen anywhere else. Altman could get those kinds of performances.

For more, check out this Filmography from the New York Times.
Posted by Paul F. Etcheverry at 9:39 AM No comments:

From the Walter Lantz Swing Symphonies series, Abou Ben Boogie is a rarely seen gem, largely due to its mixture of 1940's era stereotypes and overt sexuality. Thus, it needs the inevitable disclaimer, i.e. THIS FILM WAS MADE ONE FUCKING LONG TIME AGO!!! And indeed it was.

While the "dancing girl" scenes remain my favorite part of this cartoon, this is only one facet of the brilliant animation by Pat Matthews, Grim Natwick and Emery Hawkins, orchestrated by the directorial genius of Shamus Culhane. This group also produced the much better known Woody Woodpecker and Andy Panda cartoons, which also demonstrate emphatically that Culhane was leading quite the rock 'n' roll band at the Walter Lantz Studio in 1944.

Actually, Shamus, a most underrated animation director but also an accomplished violinist and knowledgeable classical music buff, would have not appreciated that analogy. Let's just say he led one helluva chamber music ensemble at Lantz in the mid-40's.

And thanks again, Thad K, for uploading this - and while you're at it, we'd love it if you could post The Greatest Man In Siam, yet another jumpin' Swing Symphony cartoon by Shamus Culhane and the fabulous ensemble of artists assembled at Lantz.

A good way to kick off the weekend is with this incredible 1930 cartoon, Swing You Sinners!, by New York City's legendary Fleischer Studio.

Posted by Paul F. Etcheverry at 9:26 AM No comments:

The Cuckoo was produced by ex-Disney bigwig David Hand for J. Arthur Rank in England. While it starts innocently enough, with a touch of that nauseatingly cute Disney style, it delivers the goods as soon that "Mr. Sparrow dream sequence", accompanied by the wonderfully cartoony theme song, "a cuckoo ain't so cuckoo after all," gets going.

And again, a tip of the Hatlo hat to thadk for posting this.

Here's a classic cartoon you won't see on DVD, VHS, on the big screen or on cable TV (although you may find it on overseas television as part of the Totally Tooned In show, which has never aired in the United States).

Flora, a witty spoof of film noir, was produced in 1946 by the much maligned Screen Gems Studio - and released to movie theaters in 1948, some time after the outfit's utterly unlamented demise. Often more concerned with off-kilter story concepts and oddball ideas than sight gags or characters, Screen Gems or Columbia cartoons, even at their very best, are completely different from the films of Disney, Warner Brothers and MGM - and this, for many, takes a lot of getting used to.

While Columbia cartoons often experiment in a big way - and fail in a bigger way - as a lifelong comedy and animation buff, I love their cleverness and originality. For me, the films that don't cut the mustard are those that copy Disney (in the 1930's) or Warner Brothers (1940's), not the cartoons that try really crazy s#^&%$!*t, swing for the fences and strike out.

Alex Lovy, later known for his work on Walter Lantz' Woody Woodpecker and Chilly Willy cartoons, as well as Hanna-Barbera's The Flintstones and The Jetsons, directed this Color Rhapsody cartoon, one of the last in the series. It is one of the best films from his lengthy career.

Thanks a million, thadk, for making this one available. 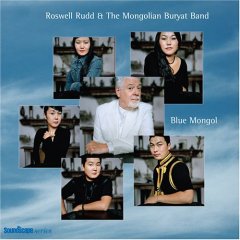 Just finished an intense two weeks attending various San Francisco Jazz Festival performances. This was the best S.F. Jazz Fest yet and everyone involved deserves a lot of credit.

One would think that trombone and throat singing might be an unlikely combination, but they are remarkably, at moments eerily, well-matched. To quote the producer of the band's recordings, Verna Gillis, "Both throat singing and trombone playing have a common source, deriving from the existence of a very strong, really low bass note called a fundamental. The trombonist and the throat singer share the task of resonating the very high overtones, resulting in a high-pitched, eerie melody—in fact, two sounds (overtones and fundamental) at the same time. The mid-ranged sounds are avoided in order to emphasize the extreme high and the extreme low. In throat singing, this gives off a very mysterious and disorienting effect, somewhat like a ventriloquist who can throw his voice so that the listener can’t believe that the sound is coming from one source. The trombone derives from the same acoustical principles: the total composition of its sound includes the extremely low and extremely high sounds. With the help of mutes and shaping the mouth cavity to emphasize the overtones, much in the same manner as a throat singer, the trombone also provides a mid range of pitches that contrast beautifully with the extremes of the throat singing. The process of musical fusion between Roswell, a legendary jazz improviser, and Badma Khanda’s folk ensemble sets up an alchemy into a new music that they have created."

I am still collecting my thoughts after attending the following wonderful festival events: a double bill of Nels Cline (the great guitarist from Wilco) and jazz giant Andrew Hill; innovative composer/pianist Myra Melford; the incomparable Alice Coltrane; and a program co-billing three jazzy Fleischer Studio cartoon classics (Betty Boop in Minnie The Moocher, Snow White and I'll Be Glad When You're Dead You Rascal You) with swingin' sounds by that most bluesy of "little big bands", Lavay Smith And Her Red-Hot Skillet Lickers.
Posted by Paul F. Etcheverry at 8:26 PM 1 comment:

While The Daily Show has already - with the animated "Midterm Elections" sketch - a wonderfully sick spoof of "America Rock" - created the last word on today's elections, I am still compelled to spout off.

I have made three conclusions after the pre-election frenzy, not only from the past few weeks but over the past decade.

After today's pointless diatribe, I promise to get back to writing about the stuff I love, movies, music, animation and comedy. . . although I am very happy that Rick Santorum lost in Pennsylvania. It couldn't happen to a nicer guy.

Posted by Paul F. Etcheverry at 6:23 PM No comments:


Here, Pastor Ted Haggard squares off with Richard Dawkins on the topic of evolution. Yes, the discussion gets a tad heated.

There is something downright heartwarming about seeing such an unabashed gay basher - and active participant in our post-2000 national nightmare - as Pastor Ted get his, ahem, (pardon the play on words) comeuppance.

I recently said that events have put satirists out of business, but Trey Stone and Matt Parker of South Park gleefully continue the art, thankfully leaving no point of view unscathed or unoffended. Although the show recently tackled the topic of teaching evolution in public schools (while directing the searing light of satire on fundamentalists and atheists alike) in a hilarious episode, here's hoping a new episode satirizing the now defrocked Pastor Ted and his rabidly partisan ilk will be out by the end of the week. . . It probably will be.
Posted by Paul F. Etcheverry at 2:28 PM No comments:

Well, I was originally planned to write a piece about the ever world-weary country and western icon Merle Haggard - you know, the guy whose tune that begins with "I'm 21 in prison serving life without parole" is certainly one of his more upbeat numbers. . . but have, alas, find myself diverted by the day's news, in this case just another of many events that have essentially put even the brightest of satirists out of business.

This week's "scandal du jour" involves one Ted Haggard, founder of the 14,000-member New Life Church, president of the National Association of Evangelicals, and hardcore "righty" - and allegations of a three-year gay relationship by a male prostitute (no, not "Fred Garvin, Male Prostitute"). The allegations could be totally false and the story may be nothing, just more utterly meaningless grist for the hungry media mill. However, even a hint that one of the national leaders in a certain noxious blend of fundamentalist religion and viciously partisan politics in this compromised democracy is even mentioned in conjunction with call boys and recreational drugs creates. . . well, I apologize, but a certain glee. Not to mention such really-not-nice thoughts as "couldn't happen to a nicer guy."

This latest story, on the heels of the Mark "boy do I love instant messaging" Foley scandal, does not quite satisfy me, however: I so wanted to see this happen to none other than "teflon spin doctor" Karl Rove, exposed in full George Michael fashion, preferably with video to back it up.