Mili's most stylish "midnight symphony" affected me personally. Upon my first viewing of Jammin' The Blues - in a 16mm print way way back when - I immediately sought out all recordings and info about Lester Young and Illinois Jacquet I could find. I was not disappointed. Still haven't been. It eventually led to an amazing night in a club listening to Illinois soulfully play "Round Midnight". . . ON BASSOON.

To this day, I still seek certain amazing recordings of these ying/yang saxophonists on CD:

Posted by Paul F. Etcheverry at 2:24 PM No comments:

Here's another clip from this 1950 film, featuring Charlie Parker and Coleman Hawkins with the rhythm section.

Dear reader, I was in a seriously crappy mood today until finding this remarkable video of Joe Pass and Niels Henning Orsted Pederson burning up the frets live in 1981. I feel better already!

And, like the promethean "Yardbird", they are no longer with us on this earth, but continue to spead joy, here playing the living daylights out of the ol' bebop warhorse "Donna Lee" at a concert in Antibes.

While I regret that there is not a "Mr. Bungle Plays Burt Bacharach" one-hour extravaganza or clip of Rahsaan Roland Kirk transforming "This Guy's In Love With You" into a fire-breathing incantation to post here, enjoy this remarkable medley of "A House Is Not A Home" and "One Less Bell To Answer" from Barbra Streisand's guest shot on a 1971 Burt Bacharach television special.

In the immortal words of Linda "Coffee Talk" Richman, Barbra's performance is "like butta." She sings harmony with herself!
Posted by Paul F. Etcheverry at 11:13 AM No comments:

"Let's Be Common" is one spirited knockabout number from Ernst Lubitsch's classic musical The Love Parade (1929). I love it! For the first and last time, here's the team of British acrobatic comic Lupino Lane and the genuinely charming dancer, singer and comedianne Lillian Roth. Yes, the Lillian Roth, the one portrayed (by Susan Hayward) in the 1955 weepy I'll Cry Tomorrow, based on her autobiography. I prefer to remember her as she is here, very funny, very energetic and very cute.


Among the greatest acrobats to appear in movies, Lupino Lane starred in wonderful silent two-reel comedies, in which he performs seemingly impossible stunts, over and over and over. After retiring from movies, he starred for decades on the London stage. Lupino's niece: the formidable director and actress Ida Lupino.
Posted by Paul F. Etcheverry at 12:22 AM 2 comments:

My Favorite Psychotronic Iconoclastic Comedy Team from the pre-Code Era 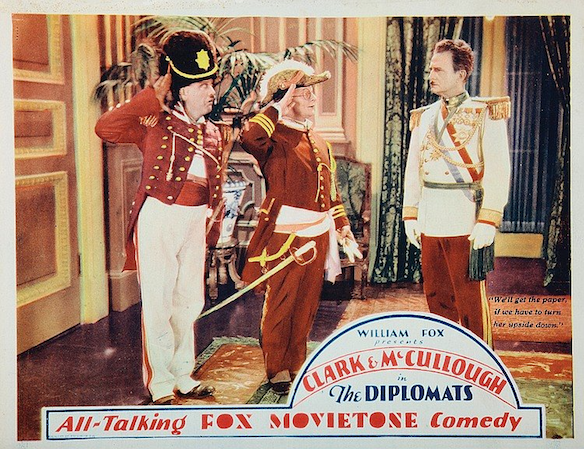 "Ultimately, the team's output for RKO is a mixed bag that seems to be something of a Rorschach test for classic comedy fans." Aaron Neathery, film historian and writer/producer, Electromatic Radio 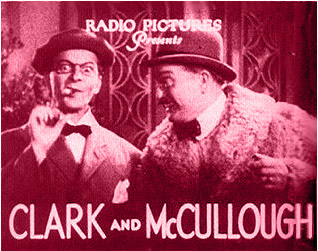 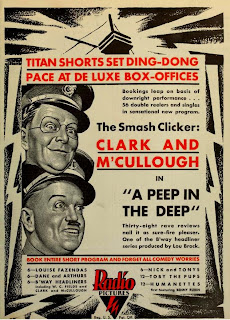 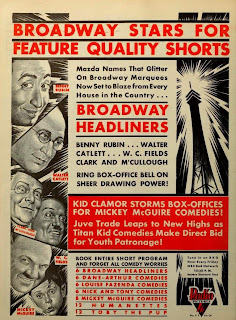 Tied with The Brothers Marx, Bert Wheeler & Robert Woolsey and such fast-talking dames as Joan Blondell and Glenda Farrell as my pre-Code movie favorites, the comedy team of Bobby Clark and Paul McCullough make me laugh out loud, for reasons - to paraphrase Pete Townshend and The Who - I can't explain. 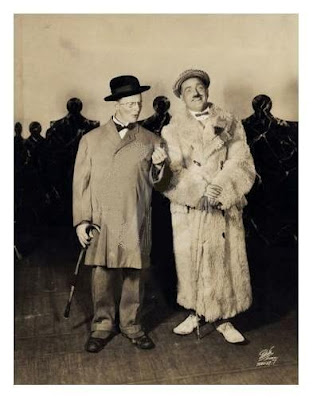 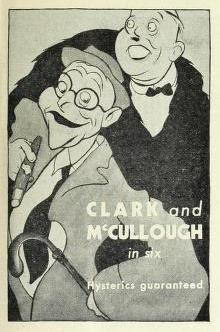 Their comic style  is, to say the least, aggressively un-cuddly and as anarchic as Olsen & Johnson, The Marx Bros. and The Three Stooges. 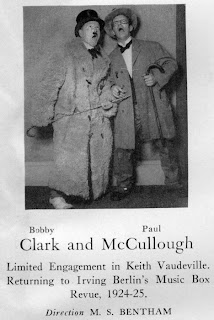 And I repeat, Clark & McCullough are not cute in any way, shape or form.

Even now, in 21st century, the most diehard classic film buffs and comedy geeks will either be in utter hysterics or register blank, uncomprehending stares at the team's stark raving mad antics.

Bobby Clark (1888-1960) and Paul McCullough (1883-1936) started their showbiz career as teenagers. Their hard knocks-filled path culminated in starring on Broadway in The Ramblers and George Gershwin's Strike Up The Band. 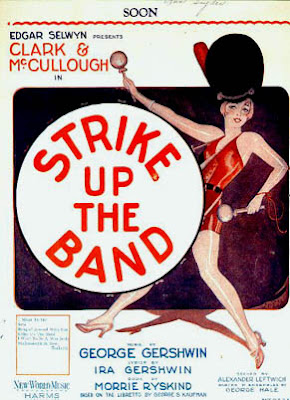 As production of early talkies proved quite the opportunity for vaudeville and Broadway acts, the team was signed by Fox to appear in two-reel comedies and featurettes, starting in 1928. 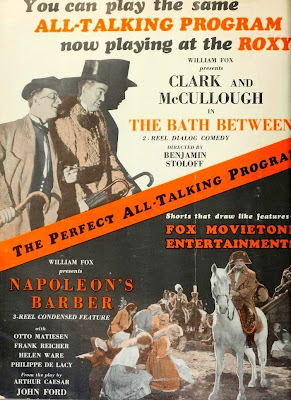 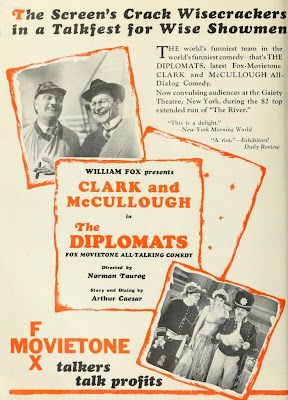 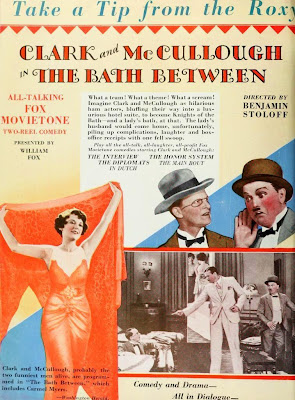 Only two entries from Clark and McCullough's Fox series, The Belle Of Samoa and Waltzing Around, still exist. 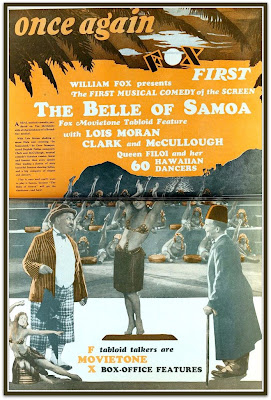 The former, in this 21st century world now available via YouTube, is a fascinating 1920's vaudeville time capsule.

The latter exists in 16mm home movie prints and, from the accounts and reviews of those who have seen it, gives Paul McCullough is much more of a focal role than he would in the team's later films. 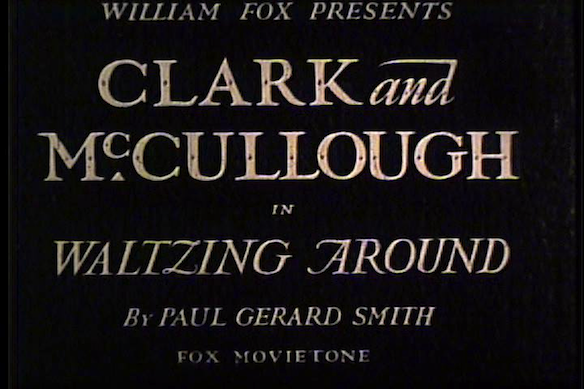 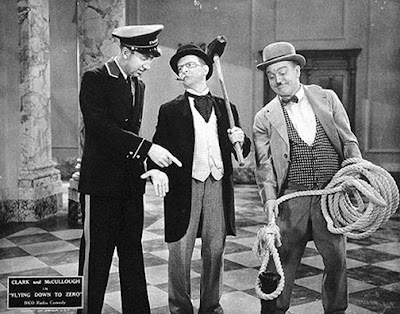 In particular, I like their 1934 opus, Odor In The Court.

Several of the funniest entries in the team's RKO series were directed by Mark Sandrich, who later was at the helm for a wildly successful series of Fred Astaire and Ginger Rogers musicals.

Clark & McCullough have been in the "lesser known movie comedy teams" category for one principal reason, besides the fact that they never starred in a feature film: Paul McCullough's suicide in 1936. 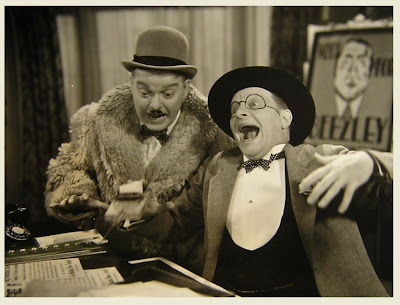 Even jaded, diehard 1930's movie comedy buffs watch their films and ask "why doesn't Paul have more to do?" and "isn't Bobby running roughshod over Paul?" 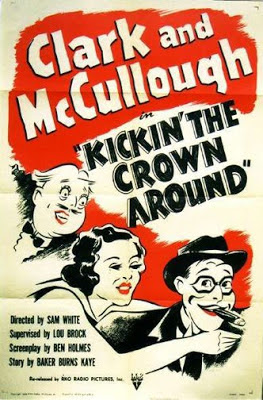 Unfortunately, the answer is often yes - and the chemistry between the boys onscreen appears uneasy at best. It is said that he is more of an equal partner in their early films for Fox than in the later RKO series, where Paul frequently has little to do other than be Bobby's straight man.

After his partner's death, Bobby Clark retired briefly before returning to the stage and pursuing a successful career as a solo comedian. 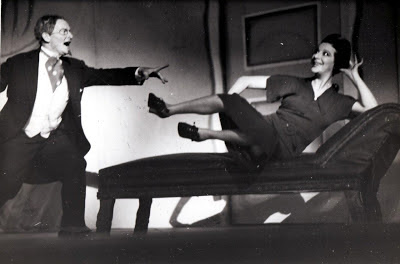 Bobby only once appeared in a movie again, in The Goldwyn Follies. 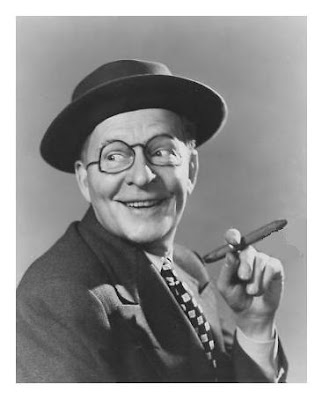 While these aren’t the easiest films in the world to see, there are DVDs of Clark & McCullough comedies available from A-1 Video, as well as Encore Entertainment and Looser Than Loose. 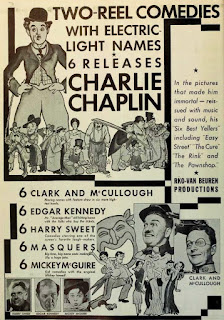 Am I thankful for DIY classic film preservationists and historians who have kept Clark & McCullough's onscreen legacy alive. YES! 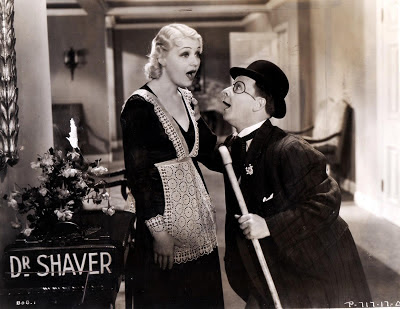 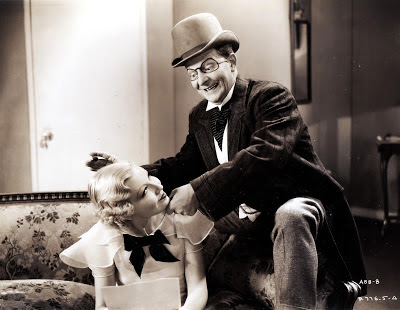 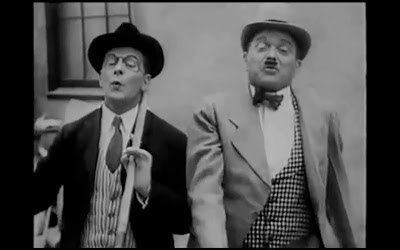 Here's Gypped In Egypt, a 1929 B&W classic from those prolific purveyors of low-budget surrealism, the ex-Paul Terry staffers of New York's Van Beuren Studio. Utterly jam-packed with that distinctive early sound era blend of laughs and utter bizarreness, it's just one of at least eight Van Beuren cartoons that consist entirely of all principals getting chased around by skeletons, mummies, apparitions and ghouls for no apparent reason. The ersatz stars: a Mutt & Jeff-like duo known as "Don & Waffles", who do a most excellent job of falling into a cartoon universe abyss - and then really getting into trouble. 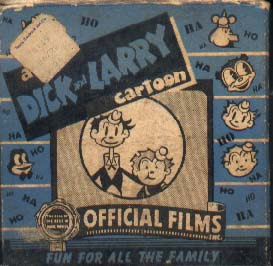 Posted by Paul F. Etcheverry at 1:38 PM No comments: 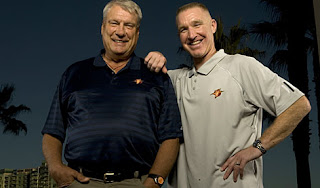 The Golden State Warriors will square off in game 3 of the Western Conference Semifinals against Utah shortly. This is a great and improbable story, and unless the Warriors somehow beat Utah and subsequently play the run-and-gun Phoenix Suns, the best playoff series in the NBA.

As anyone who has been watching the playoffs knows, The Warriors' 42-40 record and #8 finish in the West is deceptive. The playoff team as we know it was not together until the last few weeks of the regular season. There is little resemblance between this exciting team and the injury-decimated squad that had a 26-35 record as of February '07 and finished 34-48 in the past two seasons under former Stanford coach Mike Montgomery. As soon as Baron Davis, Jason Richardson and Stephen Jackson were on the floor together, the Warriors tranformed into a contender - and beat the living daylights out of the Detroit Pistons.

Perhaps most amazing: the remarkably savvy moves by Chris Mullin and Rod Higgins. Clearly, these guys have a sixth sense of when another team is desperate to unload top-notch talent. For a nice backup point guard (Speedy Claxton), a grizzled veteran at the end of the trail (Dale Davis), two role players (Mike Dunleavy, Jr. and Troy Murphy) and a young player struggling to learn coach Nelson's system (Ike Diogu), the Warriors received an exceptional point guard (The Baron), the best sixth man in the NBA (Stephen Jackson) and a solid front-line player (Al Harrington). Nice going, Chris and Rod. Very nice going. And Chris convinced Don Nelson to abandon that bucolic Hawaii retirement for one more go at coaching. It's a fitting payback after decades of dreadful Warriors trades and questionable draft choices under multiple regimes.

Whatever happens in this series, it is a new day for this long-cursed franchise. If the principals return and stay healthy, this team will contend for the Western Division title in 2007-2008.

Posted by Paul F. Etcheverry at 5:23 PM No comments: 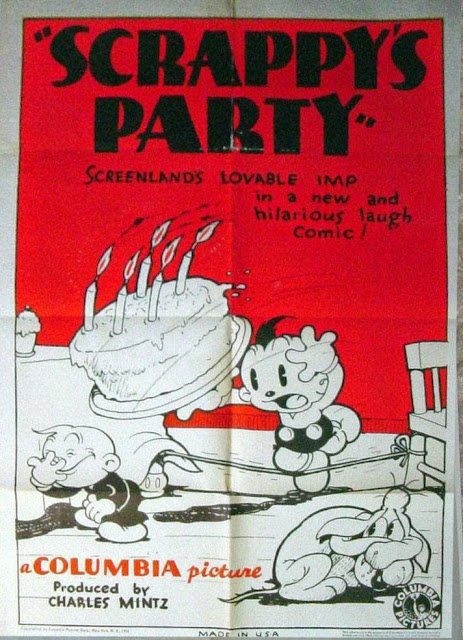 The animated antics from this studio, in this correspondent's opinion, are among the very best of the early 1930's. Ace animator Dick Huemer's work on the first two seasons of Scrappy, as well as Manny Gould's animation on Krazy Kat, made for quite a few brilliant and original cartoons. 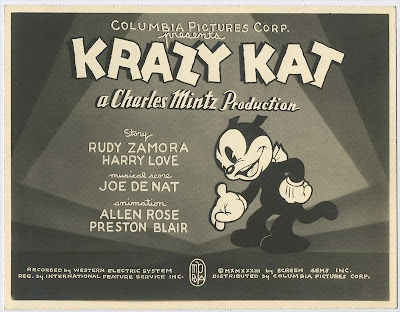 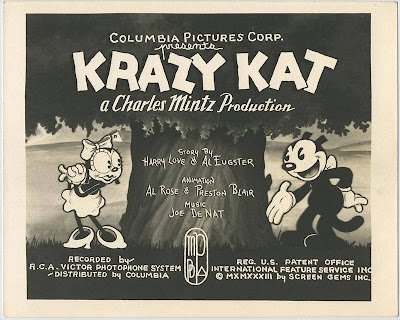 Posted by Paul F. Etcheverry at 8:22 PM No comments: 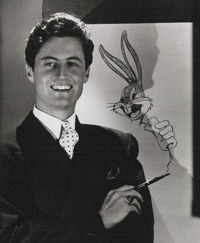 I'm raising my soon to be significantly less than half-full glass to Bob Clampett. He's definitely among The Beatles of cartoon directors (with Tex Avery, Chuck Jones and Frank Tashlin - perhaps with Friz Freleng as either "5th Beatle" Billy Preston or Pete Best). I am proud to have worked, in collaboration with animator, filmmaker and historian Mark Kausler, on one of the first published filmographies of his work way back when (uh, I was a zygote at the time, really).

For a bit of background on Bob's career, check out this superb post on David Germain's blog. Then take a gander at this remarkable scene, by ace animator Robert McKimson, from one of Clampett and crew's masterpiece Book Revue. This is followed by the complete cartoon.


Bob Clampett is very important to me personally. On the same day when I met Bob in the 70's, I bought my first 16mm films. He was uncommonly nice and generous with his time to me, then a goofy 17 year old long-haired guitarist obsessed with music and old movies (now I'm the same thing, only 51). He was also very supportive of my efforts to get recognition for animation as an art form - at that time, cartoons and comedy in particular got the full Rodney Dangerfield treatment.

At least to me, Bob was absolutely effusive in his praise of other artists, more interested in talking about stuff that inspired him - whether it was the exciting swing music of Duke Ellington or the novels of Edgar Rice Burroughs, Willis O' Brien's innovative stop-motion animation in THE LOST WORLD or Tex Avery's cartoons - than about his own work. He loved his collaborators and mentors; his eyes lit up whenever I said the words Rod Scribner, Manny Gould (for non-animation buffs, these were just two of the brilliant animators who contributed virtuoso work to Bob's cartoons) or Tex Avery. He was also the only "Golden Age Of Cartoons" icon I heard praise lesser known but important animation directors as Hugh Harman, Rudy Ising and Sid Marcus. All of this was in stark contradiction to a lot of things that were said and written about Bob during his lifetime.

Raise your glass and enjoy any one of the amazing WB cartoons directed by Bob Clampett, one of the greatest animation visionaries and comic minds who ever lived.

Thanks For One Amazing Show

Thanks to all of you who made the 15th Anniversary KFJC Psychotronix "Cinco de Psycho" Film Festival a memorable night. Psychotronic Bob, Austin Space, Robert Emmett, Psychotronic Scott, horror host Mr. Lobo, Erik "Mighty Megafant" Yee and his "time machine", the always-fetching Queen Of Trash, a helpful group of KFJC volunteers and our old friend and invaluable crew member from countless shows through the 1990's, Mr. Irwin Swan.

Oh - and yes, thank you, the audience, for rockin' the house!
Posted by Paul F. Etcheverry at 1:28 PM No comments: