The Two Greatest Television Comedies You Never Heard Of

My first exposure to no-holds-barred British comedy was not Monty Python, but a show that ran on American TV in 1971, I believe as a summer replacement. An international production featuring wildly outrageous sketches and Terry Gilliam cut-out animation, it was titled The Marty Feldman Comedy Machine.

Terry Gilliam's opening with Marty Feldman as a "reject" on an assembly line - and closing with a host of bizarre 1890's figures "losing their heads" while saying "Goodbye" - resonated with me. I also recall a delightfully campy musical segment with Barbara "Agent 99" Feldon singing "The Codfish Ball". More generally, I remember that I just loved this program, and wouldn't see its like again for a couple more years, when the Python shows hit PBS.

About ten years later, I got the opportunity to see a complete Marty Feldman Comedy Machine show. The cast included chief Goon and patron saint of Britcom Spike Milligan, as well as three actors from The Benny Hill Show. The guest star: Orson Welles. The writers: Milligan, Feldman, Barry Levinson and a post-Sid Caesar, pre-M*A*S*H Larry Gelbart. While not necessarily brilliant from fade-in to fade-out (what sketch comedy program is?), much of it was unbelievably funny. Among many highlights: Marty as Dr. Jekyll - AND Mr. Hyde - accepting an award at a banquet, Orson Welles hawking "DICTIONARY - THE MOVIE" and Milligan as an insane lounge-lizard performer singing "The Girl From Ipanema."

Let's also hope that whoever is sitting on those Marty Feldman Comedy Machine shows will decide there's a buck to be made by reissuing the series on a DVD box.

Unfortunately, because these shows - and Feldman's BBC programs - are obscure, there seems to be a lot less interest in him out on the Web than in his contemporaries and successors.

Here's an inspired and Python-esque program (that actually preceded Monty Python's Flying Circus) in which Marty Feldman was a cast member, At Last The 1948 Show, featuring John Cleese, Tim Brooke-Taylor and the late great Graham Chapman:

Yours truly will be the ringmaster/producer/film programmer/emcee for, as the inimitable Ed Sullivan used to say, a "really big shoe" just down the block from the Niles Canyon locales where Charlie Chaplin and "Broncho Billy" Anderson made movies, drank beer and chased women (not necessarily in that order) way back in 1915.

Why: cartoon fun and kick-ass music

And Now, A John K-Animated Word From Our Sponsor

And Now, An Animated Word For Our Sponsor 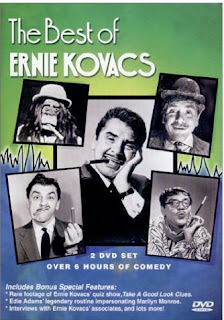 Kovacs was one of the great comedy creators - an actor/writer/director who utilized the small screen as a creative tool. His surviving shows (most of what's left remains the 1961 half-hour specials produced for ABC) reflect a restlessly inventive comic genius. Fortunately, Edie Adams worked tirelessly to preserve Ernie's legacy. One of the splendid products of this is the 2-DVD "Best Of Ernie Kovacs" set available from White Star Video.

Since I don't have a clip from Ernie's classic late-50's NBC specials, "Kovacs On Music" and "Eugene" (and alas, for the most part, kinescopes of Ernie's 1950's shows from Philadelphia and New York do not exist), not to mention the brilliant Dutch Masters commercials starring Ernie and Edie Adams - too bad - we'll finish this up with. . .

After very nearly dying of pneumonia at 19, Ernie lived the rest of his life at an absolute fever pitch, sleeping as little as possible.

Ernie's unrealized goal: produce, direct and write live-action films. It is said that he approached Sir Alec Guinness, whom he met on the Our Man In Havana shoot, with the idea of doing a "Eugene" feature.

Ernie's mother, Mary, was by all accounts one powerful woman, not to be messed with.

Ernie's daughters, Elizabeth and Kippie, were kidnapped by his estranged first wife, found many months later living in backwoods squalor in Cassia, Florida.

Ernie's signoff line: IT'S BEEN REAL.

Retrospectives: The Museum Of Broadcasting's "The Vision Of Ernie Kovacs" .

How did the innovative and groundbreaking 1961 Ernie Kovacs Show get its timeslot on ABC? Primarily because his programs did wonders for the sales of Dutch Masters cigars. . . and because Consolidated Cigar's Jack Mogulescu was a friend of Ernie's and Edie's.

Little known Kovacs gem: his superb and nuanced performance in Five Golden Hours, co-starring Cyd Charisse (the phenomenal and drop-dead gorgeous dancer from such MGM musicals as Singin In The Rain and The Band Wagon).

It's been real. Thanks, Ernie and Edie.

Posted by Paul F. Etcheverry at 7:46 PM No comments: 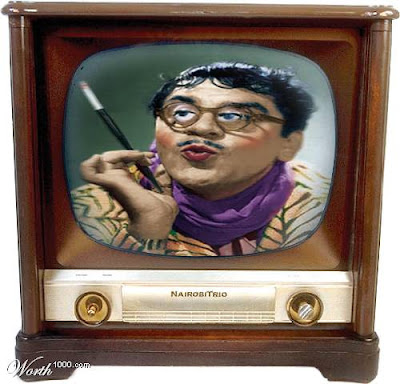 Leslie worked in a circus
he worked in a great big cage.
He smacked the lions
and beat the bears
and put them all in a rage.
He kicked the lions with iron sneakers
and rolled up army cots.
He put cleaning fluid on all the leopards
and sneered when they lost their spots.
But a chimpanzee got even with him...
Leslie got killed by some smells,
when he stuck his head the lion's mouth
He had liver smeared on his lapels.
Posted by Paul F. Etcheverry at 8:37 PM No comments: