From The Atomic Archives. . . 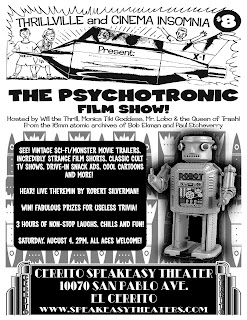 Here's the first of what will be several utterly shameless plugs for our next celluloid extravaganza, a Saturday matinee at the Cerrito Speakeasy Theatre in El Cerrito on August 4.
Posted by Paul F. Etcheverry at 10:13 PM No comments: 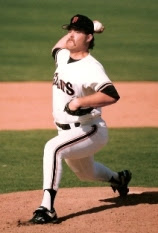 "I always thought Rod would be the perfect guy to ride in on a Harley every time he came in, because that's how he looked and that's how he pitched." Duane Kuiper, current Giants broadcaster and former Giants player
"In an era when players distance themselves from fans, Beck embraced them. He often held court in the Giants' hotel bar, buying round after round for ordinary people who would chat with him about baseball." Henry Schulman, San Francisco Chronicle
"I got down to 9.2 percent body fat and blew out my elbow, so I said fuck this, give me some grease and donuts." Rod Beck
IN THE GIANTS LOCKER ROOM, AFTER A TOUGH LOSS:
"Are you available?" sportswriter Bruce Jenkins
"Actually, I'm married." Rod Beck
It has been a tough year for that masochistic but undaunted species known as the San Francisco Giants fan. The worst news, infinitely beyond even the most unthinkable humiliation on the field, came yesterday: Rod "Shooter" Beck, Giants closer extraordinaire from 1991 to 1997, was found dead in his Arizona home. He is survived by his wife, Stacey, and daughters, Kayla and Kelsey.
"Shooter" was by all accounts a great guy. He would stay after games just to hang out with fans, shoot the bull and sign autographs. Regarding Rod's gregarious personality, sportswriter Scott Ostler quipped, "Some guys will buy a round for their buddies, or maybe for the house. Beck would buy rounds for Des Moines." The Becks were active fundraisers for AIDS research and the Pediatric Aids Foundation, as well as driving forces in the Giants' "Until There's A Cure Day".
On the field, he was only surpassed as 9th inning guru by his successor, "Rapid Robb" Nen. Both of these guys could, in true "closer" style, scare the living daylights out an unsuspecting hitter - it was their job. He led the spectacular bullpen crew of the 1993 squad (arguably the best Giants team of the past 35 years) with 48 saves and personally nailed the last out in the game that clinched the 1997 West Division title. While never possessing a blistering 100 MPH fastball or even the vicious slider that Robb Nen utilized to blow big-leaguers away, he did serve up a split-finger fastball that dropped precipitiously at just the right moment. 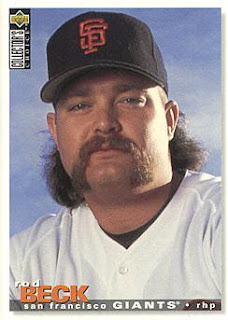 That, plus a Goose Gossage style Fu Manchu mustache and unshakeable determination (no reliever could successfully work in and out of trouble, with or without his "stuff", quite like Beck) was his mojo - and boy, did he work it. As Giants center fielder Daryl Hamilton noted, "The intensity he had coming off the mound was something I'll never forget". Such intimidating and entertaining mound presence carried on the great baseball tradition of such wild man closers as Al "The Mad Hungarian" Hrabowsky and Dick "The Monster" Radatz.
Since one of the things I like about baseball is that one doesn't necessarily have to be a ultra-buffed matinee idol to succeed, it was a pleasure to see Rod Beck, complete with excess avoirdupois and scraggly signature mullet (long in the back), take the mound and strike guys out. Beck's style, more akin to a Ron "Tater Salad" White concert than a GQ shoot or Hollywood soiree, endeared him to Giants fans.
Considering the recent passings of slick-fielding shortstop José Uribe and third baseman Chris Brown (alas, whose primary claim to fame was his inclusion in a blockbuster trade that brought the Giants slugger Kevin Mitchell, another legendary baseball character), it gives us all pause. If all of us, baseball nuts and non-sports enthusiasts alike, could just remember, always, that since there are absolutely no guarantees that we will be here tomorrow, it is vital to treat others (and ourselves) kindly now, this world would be a better place.
Posted by Paul F. Etcheverry at 10:56 AM No comments:

For my 100th post, I must tip my hat to YouTube, Daily Motion, and Archive.org. They, in conjunction with many of the blogs in my "Link" section have supplanted broadcast media as my source of home entertainment (other than playing music, of course). Boy, am I glad all three are still around - and I live in an area such terrific and comprehensive DVD purveyors as LeVideo and Amoeba Music.

I'm glad because it's possible to see clips like the following: the opening ten minutes from Hellzapoppin', the 1941 Universal feature adapted from the fabulously insane Broadway revue of the same name. This classic comedy is not available on DVD - and, be still my heart, features Olsen and Johnson, Hugh Herbert, Mischa Auer AND Shemp Howard.

I'm doubly glad because if I can't find that VHS tape I have somewhere with the Ernie Kovacs commercials for Dutch Masters, here they are:

And, if scouring every DVD store and online outlet for hard-hitting, no-holds-barred le jazz hot - the kind that isn't allowed on television anymore (actually, it never was allowed on television in the United States) - STILL turns up nothing. . . here's a wonderfully incendiary 1974 performance by the larger-than-life Charles Mingus Quintet.

A Date With Dizzy


Animation producer/director John Hubley created this very funny and still relevant short about the fun-filled realities of making television commercials back in 1956. Dizzy, as usual, sounds fantastic and there are also several stellar Hubley/Storyboard Productions commercials in the mix.
Posted by Paul F. Etcheverry at 12:18 PM No comments: 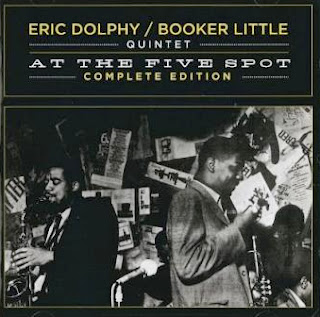 Eric Dolphy, that most brilliant and idiosyncratic of jazz improvisors, would have been 79 today. For Eric's utter mastery of clarinets, saxophones and flute, as well as his savvy as a composer and ability to tackle any genre of music, he remains among the great artists, a true 20th century giant.

To Brian Wilson, the master of symphonic pop, a very happy 65th to you - so glad you are still here! 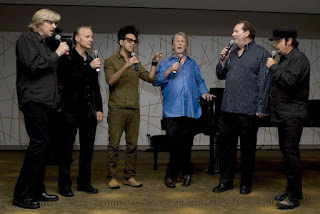 For Burt Bacharach Day, the randomly chosen 20th of any given month, here is vocalist Trijntje Oosterhuis, performing Falling Out Of Love with the Metropole Orchestra.

Whatever It Is, I'm Against It

Groucho aptly sums up my feelings about political parties, group-think (even groups I like), organized religion and just about any "ism" any of us can think of, in this great opening song from Horse Feathers, a 1932 Paramount feature starring The Four Marx Brothers.
Posted by Paul F. Etcheverry at 7:44 PM No comments: 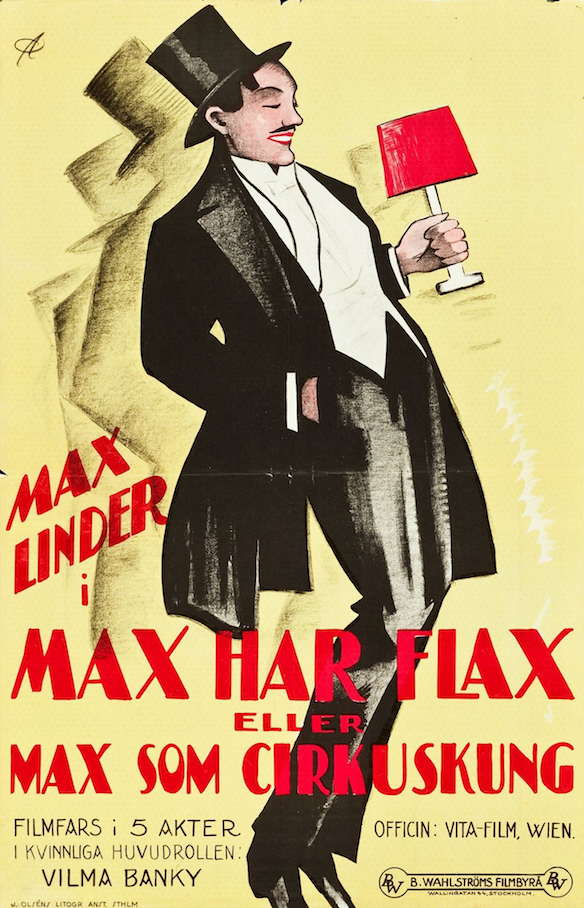 Linder (1883-1925) starred in his own series of comedy short subjects as early as 1905, before Mack Sennett, before Fred Mace, before John Bunny, before "Keystone Mabel" Normand, even before Marcel Perez.

The dapper, top-hatted performer's innovative role in developing screen comedy is comparable to Emile Cohl's pioneering contributions to animation. The perpetually-cool "silk hat slicker" character of the inspired 1920's comic actor Raymond Griffith could be regarded as a creative homage to Max Linder.
Posted by Paul F. Etcheverry at 7:14 AM No comments: 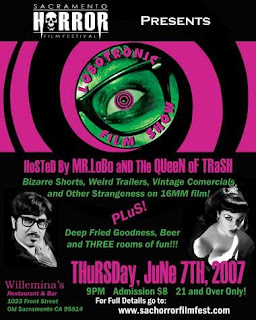 The “Lobotronic Film Show” showcases a parade of bizarre short films, monster movie trailers, vintage commercials and twisted cartoons that might otherwise go unseen by mainstream audiences. Last year’s midnight Lobotronic at the Studio Theater in Sacramento quickly sold out! Because the crowd was so enthusiastic, the 2-hour show was spontaneously extended to 4 hours. Even at 4 AM the audience was still crying for more! 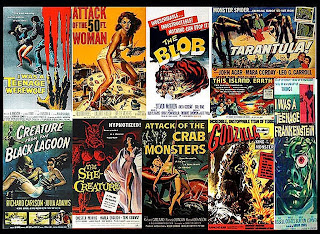 This year’s event promises to be even better with an earlier start time and 3 rooms of entertainment! In addition, this year’s event will be held at Willemina’s fabulous Restaurant and Bar in Old Sacramento, which offers, in addition to a full bar, an extensive menu of creative deep fried food, like the deep fried pizza, the deep fried pickle, and the amazing “Scotch Egg!” which is a hard boiled egg covered in sausage, breaded and deep fried! The “Lobotronic Film Show” will be hosted by, nationally syndicated Horror Host, Mr. Lobo and, cult sensation and comic book heroine, The Queen of Trash! This formidable couple has also signed on to host the upcoming Sacramento Horror Film Festival at the Colonial Theater this Fall. The Sacramento Horror Film Festival will also feature a Lobotronic Film Show as part of its programming.

One night only! The “Lobotronic Film Show” starts at 9pm on Thursday, June 7th, at Willemina’s Restaurant and Bar (1023 Front Street, Old Sacramento). 21 and over only. The admission is $8. All proceeds will go to support the inaugural year of The Sacramento Horror Film Festival in October. Come out and support Sacramento’s esoteric cinema scene! Photos and more details (including advance ticket information) can be found at

www.Sachorrorfilmfest.com
Posted by Paul F. Etcheverry at 10:44 PM No comments: