Have yet to find another clip of blazing jazz guitarists that compares to T.J. Kirk, so I will shift from the guitar to that big brother of the cello, the venerable bass violin (A.K.A. standup bass). Obviously, pianist Oscar Peterson wanted to hire the best, so he got two ridiculously skilled bassists, Ray Brown and Nils-Henning Orsted Pederson, to join him on this gig. Big fat bass notes? Check. Driving swing? Yessir. Harmonic nimbleness? To the nth degree. Fabulous intonation? Yep. Enjoy!

Posted by Paul F. Etcheverry at 7:04 PM No comments:

I would have liked to have found a clip of a bunch of gifted jazz guitarists tearing into some Burt Bacharach chord changes, thus deftly continuing the thread from my last blog entry. . .but couldn't. And not only did I miss Burt Bacharach Day last month due to the untimely passing of favorite indie rocker and Box Tops/Big Star mainstay Alex Chilton, it was just a few days ago that I finally did stumble upon an Alex cover of "The Look Of Love"; alas, that performance was not preserved on video, and not on YouTube or Daily Motion.

That said, we'll double up on Burt-related clips this month. Here's singer Mike Patton, who I had heard many years ago doing remarkable vocal pyrotechnics with the wry avant-hard rock ensemble Mr. Bungle (and who turned out to be the guy sitting next to me at San Francisco Yoshi's when I heard John Zorn's Electric Masada there last year). Enjoy Mike and Faith No More performing one of the better covers I've heard of this BB tune.

Next up, the tried-and-true Burt and Dionne Warwick combo, fabulous way back when. . . and sounding great now.

Once upon a time in the early and mid-1990's, some amazing music was being played in San Francisco clubs on a regular basis. It was the closest thing to the heady days when giants from several musical eras and genres, the majority lacking U.S. recording contracts, were performing in Bay Area venues from Keystone Korner to the Mabuhay Gardens to Kimball's (San Francisco) and, later, Yoshi's and Koncepts Cultural Gallery, proving that both jazz and rock were alive and blazing if you knew exactly where to find it.

Here are a couple of excerpts from a set at The Up And Down Club by a remarkable group that was tearing it up in those San Francisco clubs, at times more than twice a week. Their original name was James T. Kirk, as they performed cross-pollinations of music by James Brown, Thelonious Monk and Rahsaan Roland Kirk, three of the aforementioned music giants. I don't remember specifically whether the lawyers of Paramount Pictures ("Star Trek" owners) complained, but the band subsequently (and soon) changed their name to "T.J. Kirk" - thus also recalling William Shatner's uber-cheesy 1980's cop show.

The band members - guitarists Charlie Hunter, Will Bernard, and John Schott, plus the equally creative and propulsive drummer Scott Amendola - all headed other stellar ensembles and still do, but truly wonderful things happened when the four hit that happy zone together onstage. I consider myself fortunate to have caught some of that magic in person.

For more, check out the liner notes for the last T.J. Kirk recording.
The spirits of Rahsaan Roland Kirk, James Brown, Thelonious Monk - and Jimi Hendrix - are smiling.
Posted by Paul F. Etcheverry at 7:04 PM No comments: 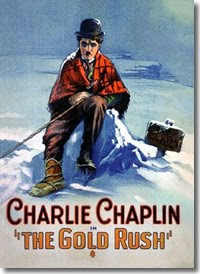 Today is the 121st anniversary of Charlie Chaplin's birth. While not the first Hollywood film star, he arguably remains the movies' top comic in terms of enduring worldwide fame - and was pretty much king of the world through much of the silent era. Chaplin followed the lead of the first silver screen comedy star, Paris' own Max Linder, by combining physical slapstick comedy and sight gags with greater nuance, sophistication, and ultimately - in his creative development from the best of the 1915 Essanay series and most entries from his 1916-1917 Mutual comedies to his 1920 feature The Kid - drama and pathos.

To celebrate, there will be screenings at the Louise M. Davies Symphony Hall of the 1925 comedy classic The Gold Rush , accompanied by a performance of Charlie's own musical score by the San Francisco Symphony. 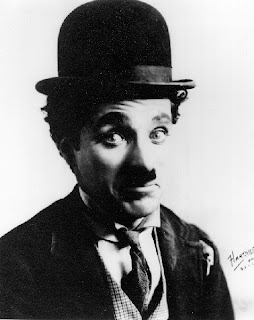 Assistant Conductor Donato Cabrera will lead the orchestra's performance of Chaplin's original score. An hour before each concert, Stephen Salmons, the co-founder and former director of the San Francisco Silent Film Festival will give a presentation and talk about the film.

There will be shows tonight at 8:00 p.m. and at 2:00 p.m. tomorrow. Here's where to buy tickets on the San Francisco Symphony website.
Posted by Paul F. Etcheverry at 8:15 AM No comments:

Musician and writer Greg Forest has done us (the music-obsessed sonic omnivore public) an immense favor byposting a slew of outstanding downloads, under From The Vaults, Live Recordings From Austin and Liberty Lunch's Post Punk Heyday 1987-1989. He also got permission from the artists and various recording companies (no small feat, although I note Little Feat isn't among the the bands represented).

Here's hopin' a 5 buck Pay Pal donation from many of us who have downloaded these great mp3s will enable Greg to post further gems from the vaults. Nice work, Austin Archives!

Just in case there isn't more than enough fabulous material available for download via The Internet Archive and Concert Vault, Phil Milstein's Probe! Is Turning - On The People website offers yet another invaluable source for fun music, comedy, novelty and spoken word mp3s of dizzying variety.

Posted by Paul F. Etcheverry at 8:10 AM No comments: