Since it isn't possible to attract high ratings or readership with hard-hitting investigative stories about serious issues, right now all the media's talkin' about Senator Larry Craig. While dealing with my "fat pains" at the gym, I noticed one of the monitors was tuned to CNN (couldn't hear it, luckily) and that Senator Craig's attempt at lavatory romance (gees, whatever happened to buying dinner, a "tickler" bouquet and a movie first) was the only topic of discussion - in an era distinguished by political skullduggery, rampant corruption and astonishing ineptitude - the entire time I was there.

Senator Craig, shut up and pay the 5000 bucks. And call George Michael - he's lonely.
Posted by Paul F. Etcheverry at 9:10 PM No comments:

That early 1970's musical landscape of prog rock and fusion is most difficult to explain to the uninitiated. Neither of the two genres were rock music or jazz in the conventional sense - not at all. They were inter-related and all over the map, although to slap Frank Zappa, Don "Captain Beefheart" Van Vliet, Miles Davis or Cologne avant-gardists Can with either term seems insulting; such labels still do not even begin to describe their music.

"Prog rock" could also mean whatever lovely, wondrous, twisted synthesis of diverse musical genres bandleader-guitarist Robert Fripp was deep into that year, in the case of the following clip, the 1972 version of King Crimson:

One of my all-time favorites from the prog rock and fusion era was a unique band from Holland, Focus.

Here's one among quite a few video clips of their piece-de-resistance, "Hocus Pocus", the mindboggling yodeling-vocalese-opera-whistling-fire breathing proto-metal number that was the most wonderfully weird thing to hit 1960's and 1970's Top 100 besides Napoleon XIV's "They're Coming To Take Me Away, Ha-Haaa".

For me, the following version of Hocus Pocus takes the proverbial cake, as the customary guitar gymnastics by Jan Akkerman are even more ridiculous than usual.

And besides, the band is introduced by Gladys Knight, a fine singer with or without The Pips.

I regret not having an amazing clip of the late great Max Roach, backed by a blend of his one-of-a-kind percussion ensemble M'Boom with Burt Bacharach himself playing cool bossa nova chords (on electric piano or synth), giving "The Look Of Love" the full Brazilian treatment: traps, mallets, brushes, sticks, wood, congas, marimbas, steel drums, etc.

Uploaded by pierrot77
Combine elements of Dusty's impassioned version of "I Don't Know What To Do With Myself" with the take-no-prisoners rendition by The White Stripes and you get some kind of epiphany.

My Toast To The Incomparable Max 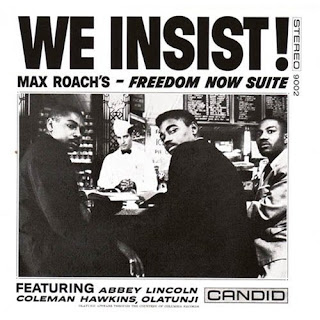 "To Max Roach, who brought moments of crystalline clarity and beauty to the deepest improvisational frenzy."
Drum Solos - Max Roach 1
Uploaded by madafonka2

I absolutely detest having an "R.I.P. blog", since countless truly great individuals - some famous, most only known to their loved ones - shuffle off this mortal coil every day. However, jazz is a pet topic and we just lost a towering and uncompromising figure, percussionist, composer and bandleader Max Roach.

Here's a sample of the pure magic the percussion master could conjure from a hi-hat.

Enjoy this clip of Max' quartet - Cecil Bridgewater on trumpet, Billy Harper on the tenor saxophone and Reggie Workman, the beating heart on the upright bass - kicking serious ass while challenging conventional wisdom in 1977.

Posted by Paul F. Etcheverry at 1:06 PM No comments: 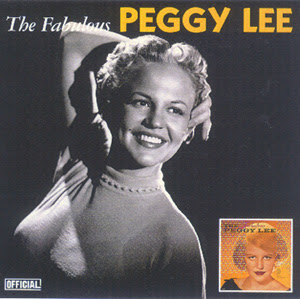 I'll wager this is the only blog around that features posts on both The Buzzcocks and Peggy Lee in the same week!

As a guy who enjoys singin' those lounge tunes, I often listen to great vocalists to steal ideas from - I mean for inspiration, really! In the mid-1940's, three of the best, Nat King Cole, June Christy and Peggy Lee, were recording wonderful jazzy sides for Capitol Records. The Cole sides, amazingly, sold, so the label recorded lots more in that relaxed yet swingin' approach. This represented the cutting edge of that era's popular music; even Sinatra himself didn't quite catch up with this remarkable trifecta until he signed with Capitol a few years later.

Serious immersion in The Complete Peggy Lee and June Christy Capitol Transcription Sessions has left me with nothing but admiration for these two vocalists, as well as musical director and guitarist Dave Barbour. Both made their names with the more modern big bands (Goodman and Kenton, respectively), but, instead of squandering their first solo recordings on pale preppy commercial music, they created masterpieces of small-group jazz.

While June Christy is notable for her sophisticated swing, wonderful liquid vowels and highly imaginative musicianship, Peggy Lee demonstrates an unerring knack for deeply understanding and expressing a song's emotional life (her rendition of "Porgy" is especially powerful), in a way only matched by Louis Armstrong. Christy knocks Ellington's "Prelude To A Kiss" out of the ballpark as if it's an easy tune to sing. And Lee's recording of Irish folk chestnut "Molly Malone", in which the band's upbeat, jazzy accompaniment contrasts (probably unintentionally) with a vocal that digs very deeply into the tragedy in the lyrics, is one weirdly compelling Mulligan stew.

Imagine, the idea of making great music, as opposed to registering high marks with focus or test marketing groups, as the reason for recording and creating. What a concept! That was the m.o. of Nat Cole, June Christy, Peggy Lee and Louis Armstrong - and they have stood the test of time. Swing into eternity, baby.
Posted by Paul F. Etcheverry at 9:27 PM 2 comments:

Barry Bonds is the Lance Armstrong of baseball. Lance Armstrong is the Barry Bonds of cycling. The Tour de France is the buck naked reality of sports competition, and has been for a long time. That's the way it is. OK, I'm a cynic - so sue me. Anything that strikes me about this story?
Posted by Paul F. Etcheverry at 12:16 PM No comments:

They're Old, They're Punk, They Rock

Never Mind The Bollocks, here are Manchester's The Buzzcocks, live in 2007.

Old is a state of mind - well, at least until you're pushin' 80. Don't go there until there's absolutely no choice.