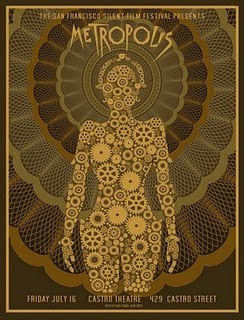 It turns out every cineaste scribe, his/her brother and Aunt Millie - not a one "way too damn lazy to write a blog" and including a prolific local correspondent and researcher who made stalwart contributions to the program notes - covered the 2010 San Francisco Silent Film Festival at length. Check their detailed accounts out here.

Also deserving of kudos: Michael Guillen's transcriptions of festival events and the review author Leonard Maltin posted on his website. 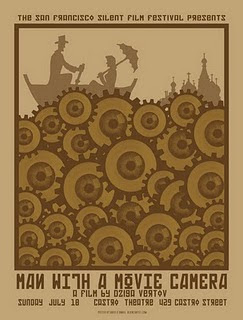 My favorite films, with full admission that the restored Metropolis and Dziga Vertov's Man With A Movie Camera blew me away (as expected), were the "lovable lug and ragamuffin" boxing flick The Shakedown and Mario Camerini's brooding drama Rotaie, produced in 1928 during the height of Murnau-Borzage-Fox, but more akin to a 1940's neo-realist film or a Monty Clift "tormented young antihero" opus from the 50's. 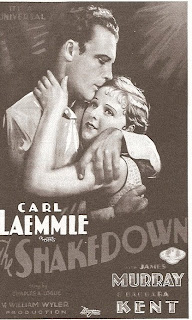 The Shakedown in particular was a pleasant surprise and demonstrated emphatically that William Wyler had his directorial chops early on. Enjoyed the well-crafted, skillfully edited boxing sequences and comic scenes between "the ragamuffin" played by Jack Hanlon and ubiquitous comedian-character actor Harry Gribbon. 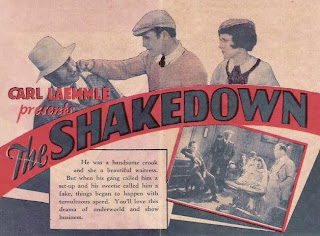 James Murray, who you may recognize from King Vidor's The Crowd, did a fine job as "the big lug"; the extent to which this talented young actor threw a promising career away is nothing short of mind-numbing.

I had a blast at the festival, but by midway through the last day, it was apparent that I'd hit that Roberto Duran "no mas, no mas" point: my eyeballs felt as if they were going to drop out of their sockets, roll around and then look accusingly at me, as if I were starring in a Ren & Stimpy cartoon.

I did, however, get the opportunity to briefly meet Paula Félix-Didier and Fernando Martín Peña, the intrepid archivists responsible for restoring Metropolis to its original length, thank them and say "hey - maybe next time you'll find Murnau's 4 Devils". . . which got a big laugh. 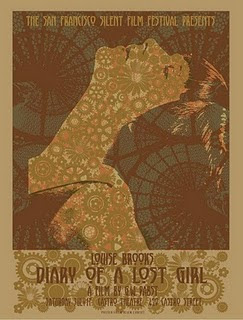 Like that itch you just have to scratch, the KFJC Psychotronix Film Festival returns for another evening of 20th century pop culture deconstruction next month. 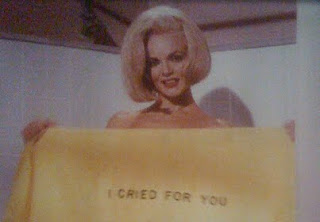 At Foothill College's Room 5015, where we did the very first one of these shows in December 1992, the crew of improvising film historians and host Robert Emmett will be back with yet another indescribable and hallucinatory blend of outrageous, hilarious, bizarre and fun forgotten (sometimes justifiably) footage. 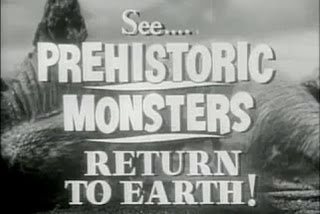 I never, ever know just what my inspired co-conspirator archivists Sci Fi Bob Ekman and Scott Moon will bring to the celluloid Osterizer - and that's exactly the way I like it! 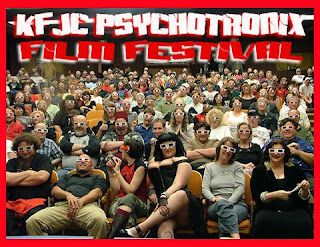 Posted by Paul F. Etcheverry at 4:47 PM No comments:

This is a beautiful song by Burt Bacharach that gets me every time.

Posted by Paul F. Etcheverry at 1:40 PM No comments:

The latest is that the Friday evening screening of the restored Metropolis is sold out, although Festival Pass holders can see the show. Further updates can be found on the San Francisco Silent Film Festival website.

While there have been some good comprehensive pieces about the festival, the best article I've read thus far has been Richard Von Busack's write-up in The Metro.

Since I have frequently written on this blog about the silent and early sound era comedies of The Hal Roach Studio, A.K.A. The Lot Of Fun, I'm pleased that Pixar director Pete Docter has picked three howlingly funny silents - two by that unbeatable Leo McCarey/Laurel & Hardy/ Roach Studio trifecta - for the Saturday morning comedy show. 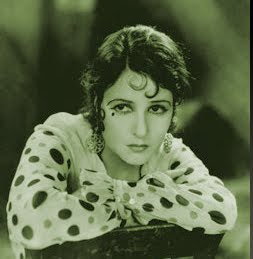 The spectacular art-deco movie palace The Castro Theatre plays host to the San Francisco Silent Film Festival this weekend. It is the 15th Anniversary of what began as a single screening of Ernst Lubitsch's 1918 opus I Don't Want To Be A Man and, thanks to tons of work by co-founders Stephen Salmons and Melissa Chittick (and regiments of volunteers), evolved into a three day event rivaling the epic Pordenone Silent Film Festival.

The big screen fun begins Thursday night with John Ford's epic The Iron Horse and will include Friday evening's sold-out screening of Fritz Lang's Metropolis, complete with the footage discovered by ace Argentinian archivists, who will be there to tell their story.

My only complaint is that the festival transpires on the same weekend as Slapsticon, the four days of screen comedy rarities holding forth at the Rosslyn Spectrum Theatre in Arlington, VA. One of these years, I'd really like to attend both festivals!

Posted by Paul F. Etcheverry at 9:02 PM No comments: 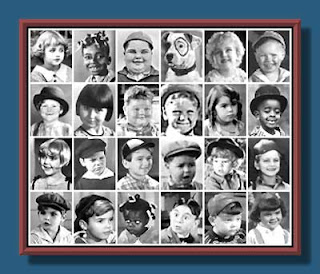 The mere mention of Hal Roach Studio comedy stars Our Gang (A.K.A. Little Rascals), Harold Lloyd, Charley Chase, Laurel & Hardy, etc. brings to mind the line from John Ford's 1958 film The Last Hurrah, "how can you thank someone for a million laughs?"

One way for San Francisco Bay Area classic comedy fans to do just that - and have some fun in the bargain - would be to attend the Niles Essanay Silent Film Museum's Tribute To Dorothy DeBorba, the winsome and hilarious Our Gangster who passed away at 85 on June 2. 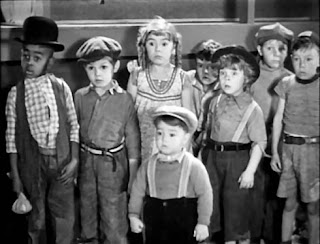 Dorothy, towards the end of her memorable stretch in the formidable early 1930's Our Gang lineup, with Stymie Beard, Dickie Moore, Spanky McFarland and Tommy Bond (before his later Our Gang incarnation as uber-bully Butch Rafferty).

Among the Our Gang alumni who dodged the "child star curse" chronicled on Neatorama at length recently as The Curse Of The Little Rascals, Dorothy, thankfully for Bay Area classic film fans, made frequent appearances at screenings and was as fun as the Hal Roach's Rascals comedy short subjects that lightened the load of Americans during the height of the Great Depression. Leonard Maltin's tribute on the Movie Crazy website says it all regarding Dorothy's affable, good-natured personality. 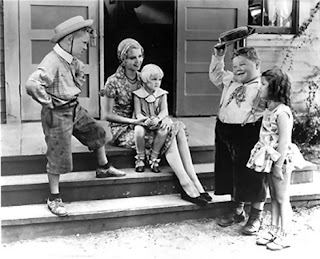 I have no doubt that the Niles Essanay Silent Film Museum staff, the Sons Of The Desert's Midnight Patrol tent and S.F. Bay Area film historian Paul J. Mular have put together what will be an exceptionally entertaining Sunday matinee for the occasion. Of course, the penultimate vehicles for Dorothy's comic talent, Love Business and Dogs Is Dogs, will be on the bill. 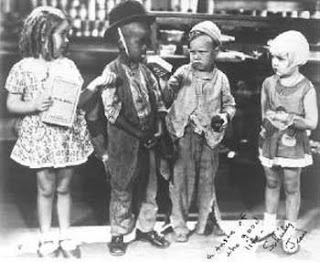 We needed laughs and fellowship then and need 'em now, and the 20-30 minute gems produced by the Hal Roach Studio in the 1920's and 1930's still deliver the goods. 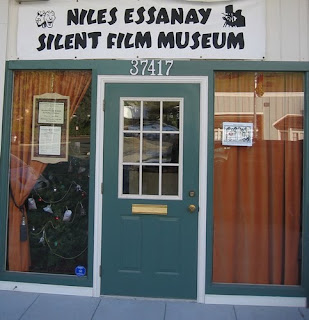 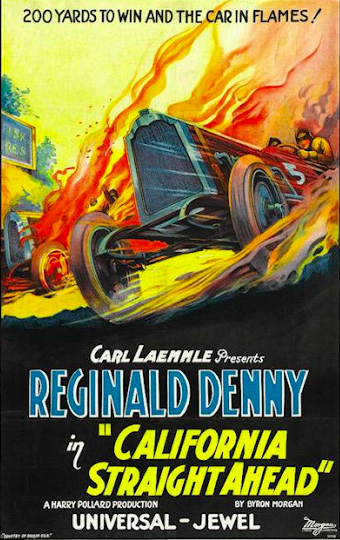 Posted by Paul F. Etcheverry at 8:17 AM No comments:

Ernie Kovacs As "Eugene" (In Color) In The Tilted Table Sketch, 1957

The "Tilted Table Sketch" is from Ernie's classic "The Silent Show", which originally aired on NBC on January 19, 1957. The newly Dean Martin-less Jerry Lewis was signed by the network to do a 90 minute special that night, but he would only agree to give NBC a one hour show. Asked to fill the remaining 30 minutes and save the day: Ernie Kovacs.

Ernie would remake The Silent Show in glorious black and white for his 1961 ABC series.

We thank rolko52 tons for posting this historic piece of video from one of the rare available kinescope copies. Rolko - are you a professional film/broadcasting archivist, close friend of the late, great Edie Adams or both? We'd love to hear from you!
Posted by Paul F. Etcheverry at 10:48 PM No comments: 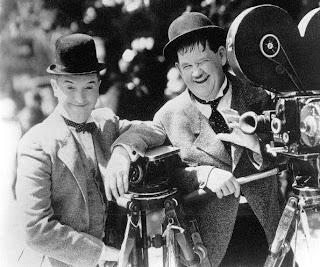 As a big fan of Laurel & Hardy, all I can say is this is great! Wish I could have been there in Edinburgh for the fun. Thanks, Tilda - you rock!

Laurel and Hardy, like fellow Hal Roach Studio stalwarts Charley Chase and Leo McCarey, definitely had "song and dance man" in their souls. Here is the charming and funny bit from the Stan n' Babe classic Way Out West that inspired Tilda and the Edinburgh Flash Mob.

Laurel And Hardy: still the best!

Posted by Paul F. Etcheverry at 8:48 AM No comments: 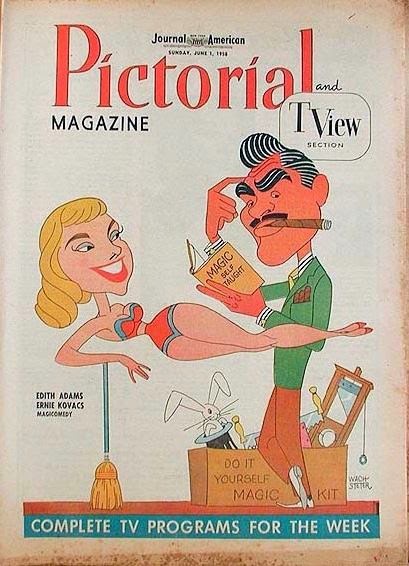 I know, the following wonderfully loopy Kovacsian take on "Naughty Marietta" / "Italian Street Song" (My Heart is Back in Napoli / Zing-Zing)" does not have a damn thing to do with July 4 or Independence Day - and I don't care. It's my blog, by cracky! 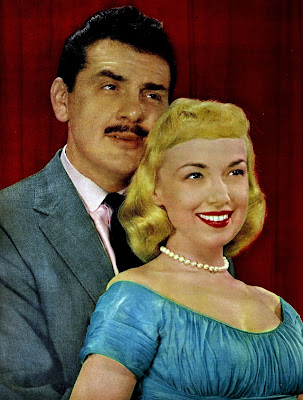 Nothing says Americana to me quite like the inimitable sight gag genius and absurdist sensibility of Ernie Kovacs, enhanced by Edie Adams' deliciously wry performance. Enjoy the comic fireworks!

Posted by Paul F. Etcheverry at 8:35 AM No comments: 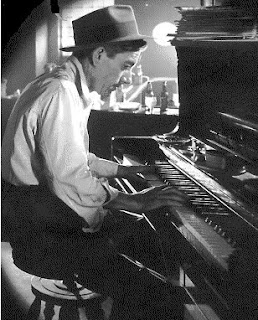 "Two Sleepy People" was written by Hoagy Carmichael and Frank Loesser when the latter was working as studio lot lyricist for Paramount Pictures. The powers that be at Paramount hoped that Hoagy could, like clockwork, crank out another hit to equal "Thanks For The Memories", the boffo Bob Hope and Shirley Ross duet penned by Leo Robin and Ralph Rainger for The Big Broadcast Of 1938. While not the overwhelming hit that Bob's theme song was, "Two Sleepy People" added another doozy of a charmer to Carmichael's repertoire, and also provided a key career break for Loesser (who even then had his sights on Broadway).

IMO, this is the most genuinely romantic of pop standards; the lyrics are actually about the relationship and tangible experiences between two people, as opposed to the lame-brained romantic mythology, adolescent fantasies and/or infatuation drivel that make many "love songs" range from merely false to positively cringe-worthy.

Hoagy himself got a shot at recording "Two Sleepy People" in his inimitable laid-back style in 1958.


The incomparable songwriter, stride pianist, vocalist, cut-up and all-around raconteur Thomas "Fats" Waller waxed this into a hit in December 1938. The multi-talented Waller passed away from an extended stretch of hard living (A.K.A. too much fun + too little rest) in 1943, just as he was breaking into a new career as songwriter for Broadway.

Offering proof positive that this Hoagy n' Frank ditty sounds fantastic in the 21st century, here's a sweet performance of "Two Sleepy People" from Joe's Pub in fabulous New York City on July 22, 2008. Take it away, Howard and Nellie!