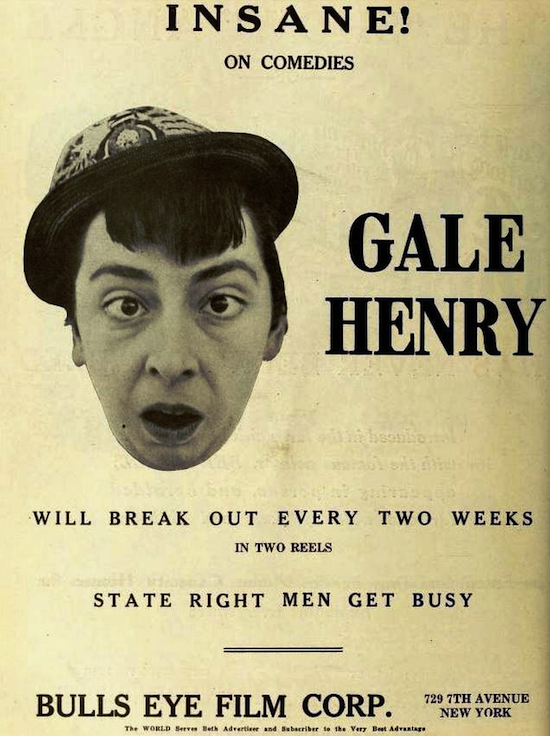 "While her performing style could be very broad, she also had a gift for small, insightful gestures that could bring a moment of pathos and feeling into the knockabout. She was equally adept at being demure or projecting a world-weary cynicism. " Steve Massa

"Like her contemporaries Alice Howell, Mabel Normand, Marie Dressler, and Louise Fazenda, Gale took many bumps and bruises in the name of laughter alongside her male comedian counterparts in an estimated two hundred fifty-eight shorts and features, some of the craziest of which she wrote. " The Women Film Pioneers' Project

“Treat a dog kindly and he’ll do anything in the world for you.” Gale Henry 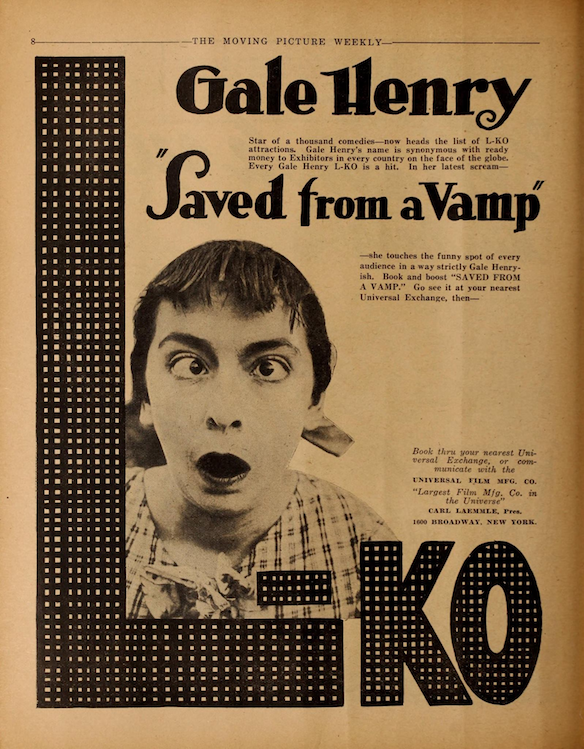 Our contribution to the 2015 Silent Cinema Blogathon, hosted with panache by In The Good Old Days Of Classic Hollywood and Lauren Champkin, starts with an unanswerable question. 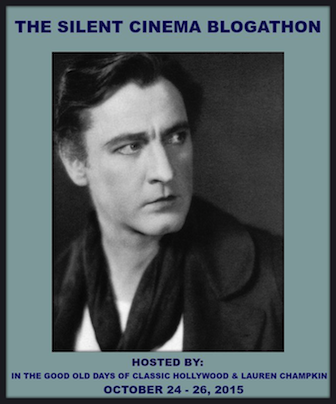 Just who was the funniest comedienne of silent movies? Of course, what specifically tickles one's funny bone is a matter of personal taste, and this is tantamount to pondering who was a better baseball player, Willie Mays or Roberto Clemente. The temptation is to open and close this question emphatically with Marie Dressler and Marion Davies, tied for that honor on the strength of the devastatingly funny MGM features The Patsy and Show People. 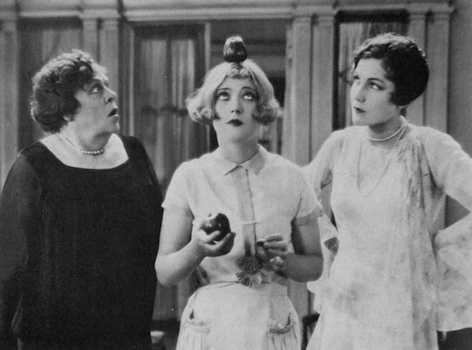 That said, there were many remarkable comediennes in the WW1 era and 1920's. Some died very young, way before the likes of author/documentary filmmaker Kevin Brownlow and Sam Gill of the Academy Of Motion Picture Arts & Sciences could interview them. 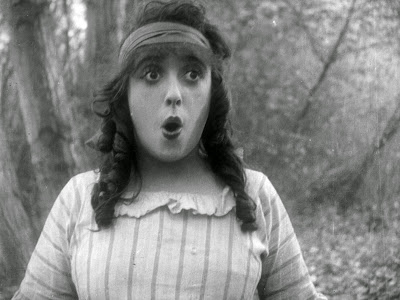 The wonderful "Madcap Mabel" Normand headlined features starting in 1917, but made her last film in 1926 and passed away in 1930. 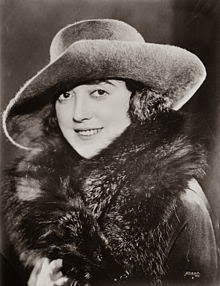 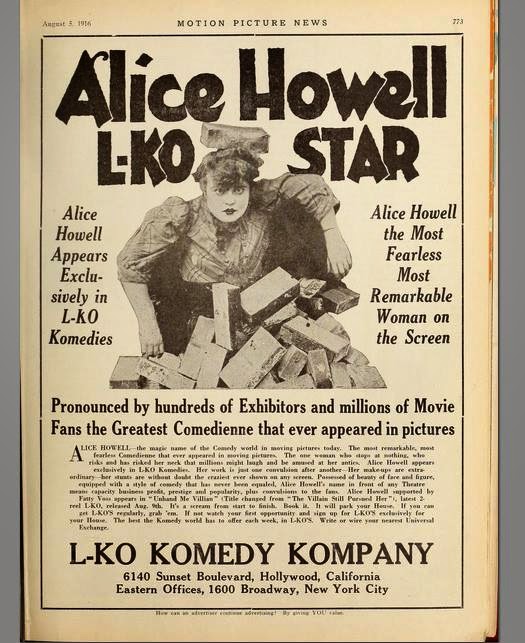 There were some amazingly funny comediennes from silents who, possibly due to frequent appearances as supporting players rather than headliners, get a bit of short shrift. 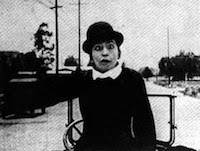 In the opinion of Way Too Damn Lazy To Write A Blog, topping that list would be one of the funniest women ever to appear before a 35mm movie camera - and the only one to enjoy a highly successful career as a comedienne, character actress AND as a trainer of talented dogs for the movies: the fabulous Gale Henry (1893-1972). 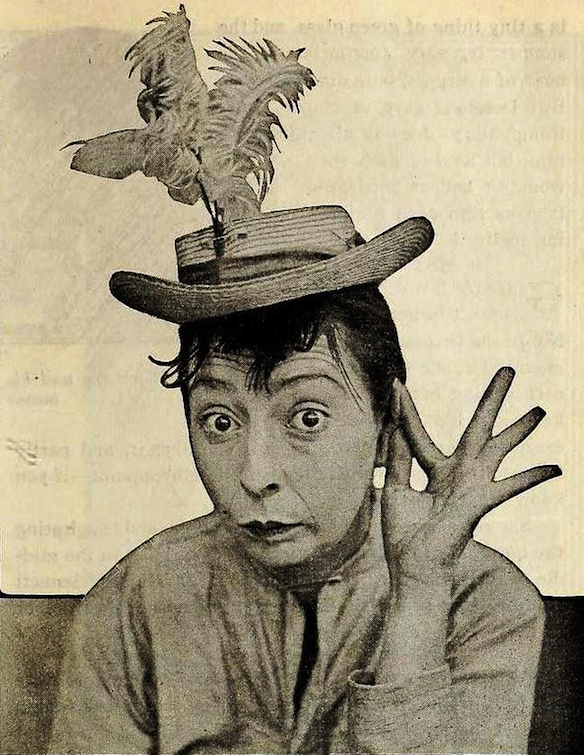 Much of Gale's work - and that's hundreds of comedy shorts made by Universal, Nestor, L-Ko and Bull's Eye/Reelcraft from 1914-1919 - has been lost due to vault fires. Indeed, silent movie aficionados know all about it - the inevitable Nitrate Won't Wait reality.

That includes an overwhelming majority of the short subjects Gale headlined (including the Lady Baffles & Detective Duck series that spoofed cliffhanger serials), as well as her excellent character roles in a good many feature films. 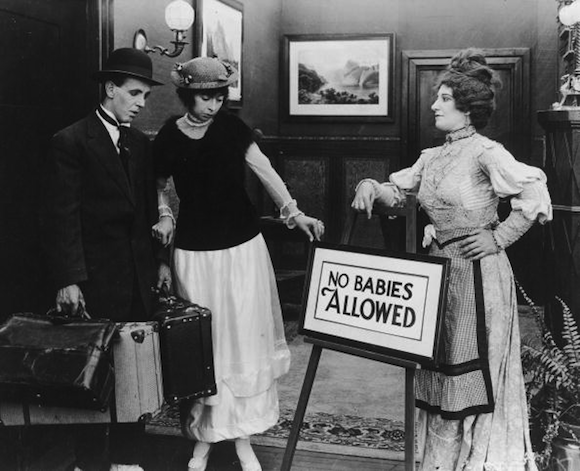 At one point, she seemed to be making two films a week for the ridiculously prolific Universal Joker series, directed by Allen Curtis. 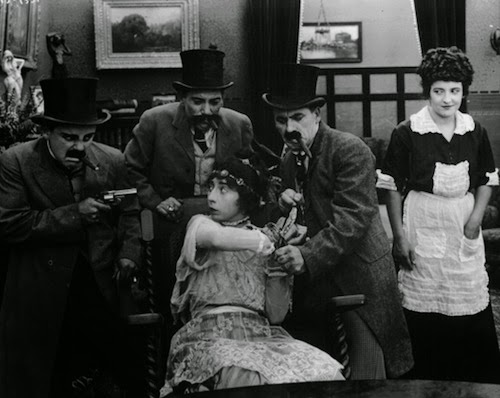 Your Correspondent reiterates: Gale Henry starred in HUNDREDS of comedy shorts, mostly for Universal, then for Nestor and L-Ko, throughout the WW1 era. Here are a couple of them. She imbues her roles with tremendous personality and chutzpah.

After the aforementioned gazillion appearances in Universal, Nestor and L-Ko comedy shorts, Gale organized her own production company and starred in her own series, writing them or co-writing the comedy short subjects with first husband (and director) Bruno J. Becker. 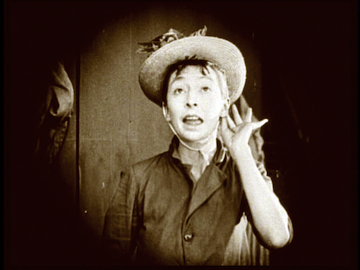 The following, The Detectress, both funny and emphatically politically incorrect even by the lax standards of 1919, can be seen on disk 4 of the Slapstick Encyclopedia DVD set.

Gale moved on to play numerous character parts as spinsters and most officious ladies, shining in such films as Open All Night and Merton Of The Movies. 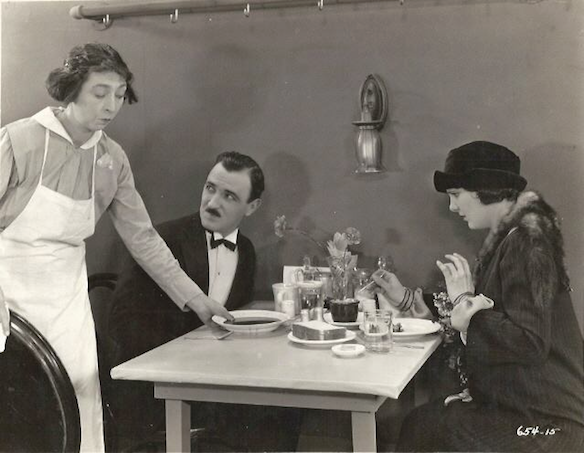 At the same time, she continued appearing as a guest star in numerous comedy shorts.

These included Gale's roles as a semi-regular featured player in the comedy short field's "gold standard", the Hal Roach Studio's series starring Charley Chase, crafted with comic ingenuity and sophistication by its headliner-director-writer, in collaboration with director Leo McCarey. This writer considers His Wooden Wedding, featuring a quintessential Gale Henry performance, arguably the funniest comedy short ever made.

While Gale's memorable character roles in Charley Chase comedies would continue into talkies, gigs in front of the cameras in general began dwindling while her second career was as dog trainer supreme picked up steam. Gale and husband Henry East had started the kennel as a side business, soon to find that East Kennels would - please pardon the Fractured Fairy Tales style play on words - became top dog in the field. Later such talented trainers as Frank and Rudd Weatherwax (Lassie) were taught by the Easts.

The most famous of the winsome fur-bearing movie stars trained by East Kennels was none other than everybody's favorite screen canine - well, not named Pete or Cameo - the pooch seen in Thin Man movies and in Bringing Up Baby, the amazing Skippy, otherwise known as Asta. 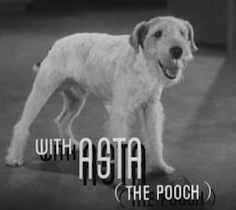 As far as Gale's stellar work as a dog trainer goes, the splendid science writer Kate Kelly wrote a rather amazing piece for the America Comes Alive website about the beloved Asta and it does have some prime material on the Easts.

Not a heck of a lot has been written about Gale's 20-year movie career, but the late Kalton C. Lahue, the aforementioned Sam Gill and Steve Massa (from the Billy Rose Performing Arts Library) have certainly given it the old college try with their impeccably researched and breezily written studies of silent comedy history, Clown Princes & Court Jesters and Lame Brains And Lunatics: The Good, The Bad And The Forgotten Of Silent Comedy, respectively - musts for any classic film buff's bookshelf. 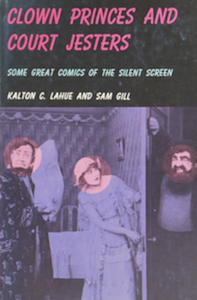 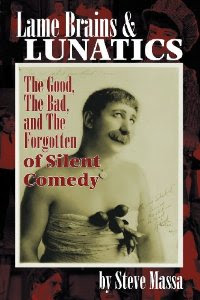 In closing, we who are Way Too Damn Lazy To Write A Blog extend big time thanks to Jim Kerkhoff, the historian from whose collection the photos in this post came from, the Laurel & Hardy and
Posted by Paul F. Etcheverry at 11:03 AM

So far, I've only seen Ms. Henry in "Mighty Like a Moose", but will certainly remedy that oversight soon. You chose an excellent subject for the blogathon and did her proud.

Thanks, Caftan Woman - I note that you have penned a cool post for the Silent Cinema Blogathon about a John Ford western I've never seen!

It's tough to find Gale Henry films, as Universal Pictures had a particularly atrocious record regarding preserving their own films. Think one can buy Open All Night with Gale and "silk hat slicker" Raymond Griffith on DVD through Grapevine Video. Maybe TCM will do us a favor and have a Hal Roach Studio night and run marvelous comedy shorts in which Gale co-starred with Charley Parrott (a.k.a. Charley Chase) - A One Mama Man and Skip The Maloo! especially.

That was fun. I have enjoyed the few Gale Henry movies that I have gotten to see. And to think that she trained Asta, too.